What is causing the odor is your water? 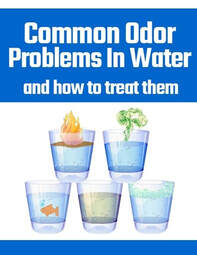 If you smell a sewage-like odor coming from your water heater, it is likely that hydrogen sulfide gas is present. Hydrogen sulfide is a gas that can cause irritation and is commonly produced by bacteria in hot water heaters when the temperature is low or the unit is turned off for a period of time. The gas can be detected at levels as low as . 5 parts per million. The most common cause of a bad smell in your water heater is an overgrowth of bacteria which can cause a sulfur or rotten egg smell. These bacteria can survive in your hot water tank without oxygen, and react with sulfur and the magnesium in the sacrificial anode rod to produce smelly hydrogen sulfide gas. You can help prevent this problem by regularly draining and flushing your water heater, and by replacing the sacrificial anode rod when it becomes depleted. There are several ways to stop the sulfur smell in hot water. A temporary solution is to use a concentrated chlorination treatment before each use. A permanent solution is to install a corro-protec powered anode. Another option is to replace the magnesium anode with an aluminum anode, but this is not recommended. The final option is to install a powered anode.
If the sulfur level in your drinking water is not too high, it shouldn't lead to any health issues. However, too much sulfate could lead to the following problems:
In some cases, drinking water with a high sulfate content can have a laxative effect and lead to diarrhea, which can then cause dehydration. So if you're experiencing any of these symptoms, it's best to talk to your doctor. ​Taking a shower with sulfur water is perfectly safe. The presence of sulfur in water, which mostly gives off a “rotten egg odor”, has no known health effects on your health or overall wellbeing. If you can tolerate the smell, there's nothing wrong with showering in sulfur water!